The main goal of the initiative is to study the phenomena of political communication and the circulation and construction of information after certain natural disasters that occurred in Spanish colonial America.

In contrast with an interpretation that privileges the analysis of the circulation of information between the cities of the Hispanic peninsula and the American territories under its jurisdiction, the works to be presented during the conference will emphasize the formal, informal and multidirectional networks which connected a myriad of urban centres as well as the various social actors, institutions and corporations (clerics regular, merchants, bishops, oidores, viceroys and officials of the cabildos, etc.) who played a fundamental role in these networks.

Such an analysis will highlight the polycentric nature of the Hispanic Monarchy and will contribute to determining new geographies of knowledge that will make it possible to demonstrate the role of the Atlantic territories in the configuration of the knowledge of risk and emergency in the Early Modern Age.

News of the event 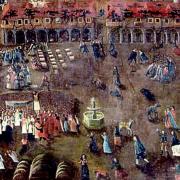 Rexpublica and DisComPoSE in discussion
0 replies