Blog - Latest News
You are here: Home / 27th and 28th October: Construction and transmission of the memory of natural...

This was confirmed by the researchers who participated in the conference Memory and oblivion of traumatic events in the Early Modern Age, organized on 27th and 28th October by the team of the research project DisComPoSE in collaboration with the Instituto Cervantes in Naples.

During these two days of study the speakers focused on the processes and the power relationships through which the individual experiences and memories of traumatic events are filtered and reassembled in shared stories. They also discussed the ways in which the societies of the past preserved the memory of the calamities that had impacted on them.

The development of adaptive and preventive behaviours, suggested by the transmission of the memory of past disasters in late medieval and early modern Europe has been investigated and it has been demonstrated that in some areas the transmission of memory favoured the development of prevention or response practices and the establishment of judiciaries with the task of risk prevention and mitigation.

The conference was opened in the afternoon on 27th October at the headquarters of the Società Napoletana di Storia Patria by a lectio magistralis held by Gabriella Gribaudi (University of Naples Federico II), entitled La memoria e il racconto della catastrophe. The scholar investigated two catastrophic events of the twentieth century: the Second World War and the Irpinia earthquake of 1980, analysing the oral testimonies of survivors and reflecting on the devastated landscapes and the medium and long-term political and administrative management of catastrophe. Next, she focused on the effects of the disaster such as the transformation of villages and the related individual and collective traumas of the affected population. Thereby, she stressed the link between war and natural disasters starting from the shared image of the ruins.

Matteo Lazzari (University of Naples Federico II) spoke on the Costruzione di memorie, distruzione di Santiago de Guatemala: il terremoto del 1541 narrato nelle Crónicas de Indias dal XVI al XVIII secolo. The researcher compared a series of historiographical sources that testify to the great diffusion (contemporaneously and subsequently) of the news of the earthquake of 1541 that destroyed the city of Santiago de Guatemala. Through a diachronic analysis of the texts, he focused on the elements of continuity and rupture in the process of the narration of the event and the construction of its memory.

In the presentation Por que como a fidelidade Portuguesa seja em toda a parte a mesma: comunicación, gestión y reacciones a la noticia de la revuelta portuguesa de 1640 en el Imperio portugués Joana Fraga, next, illustrated the coup d’état in 1640 during which Philip IV was deposed in favour of the Duke of Braganza, João IV and the media strategies developed by the new monarch to ensure his recognition in the various domains under the influence of the Portuguese crown. Through the study of the circulation and the material of the letters sent by the king, the scholar showed the conflicts and geopolitical tensions underlying the acclamation process.

Finally, Gennaro Schiano, in his presentation La memoria delle catastrofi nei generi informativi della prima età moderna, traced some of the memorialistic mechanisms of the narration of calamitous events in pamphlet news. A selected corpus of sources from the seventeenth century brought to light how the ephemeral character of the materials of these printed texts contrasts with the solid rhetoric of memory.

The debate that followed allowed an in-depth discussion about certain issues such as, for example, the relationship between war and natural disasters and the centrality of the oral dimension in the sedimentation of the memory of calamitous events.

F. J. Álvarez García investigated the relationship between war and memory, taking as a case study the two conflicts that affected Monferrato in the first half of the seventeenth century. Through an analysis of three chronicles written and preserved in different times and ways, Álvarez García highlighted how the narratives of the experience of violence and destruction caused by wars had the clear intention of creating empathy in the readers. This analysis showed how the emotional representation of the war transformed the collective memory and became a relevant element to produce local identity.

R. Ben Yessef Garfia reconstructed how the Augustinian order in the Viceroyalty of Peru in the seventeenth century linked the legitimacy of the existence of their monastery to the memory of an earthquake. The critical analysis of the official chronicles produced by three Augustinians of different origins and social backgrounds, who selected the oral and written sources of the disaster according to their needs, revealed the attempt of the religious community to perpetuate the memory of their existence at a local level to make it timeless. Such chronicles reflected, in fact, the power struggles present in society and especially inside the religious community. In her presentation, Ben Yessef Garfia argued that the recording of the memory of the catastrophic event constituted a political manifesto for the Augustinians to claim their social position in a renewed community balance.

If the identification of missionary activity in modern-day Japan with martyrdom is well known, F. Palomo del Barrio highlighted how the construction of the memory of this violence did not only take place through the mediation of Rome. The researcher showed that the “war” of texts and images produced by the different religious orders in competition to seize a sort of primacy of martyrdom had as its guiding centres also the capitals of the Iberian colonies. Religious orders in Mexico City, Manila and Macau appropriated the narrative of the martyrs in Japan and contributed to the elaboration of their memory on a global scale.

E. Cimmelli highlighted the religious rituals and the roles of the protagonists of the celebrations connected to the Vesuvian eruption of 1631. After this volcanic event cultural production linked to the protection of Saint Gennaro became abundant. The proceedings of the centennial celebrations instituted in honour of the miracle performed by the martyr in 1631 are a fervent testimony of how the Church intended to extol the devotion of the Neapolitan people to Saint Gennaro and the harmony between the social body and the Church.

The relationship between the memory of a natural disaster and religious sermons was highlighted by B. Álvarez García. In particular, the scholar analysed how the individual memory of the trauma of the Andalusian earthquake in 1680 was soon enriched by the cultural memory of the event constructed by the clergy. Álvarez García thus demonstrated that the sermons produced in connection with the catastrophe were based on specially selected testimonies in order to privilege the authoritative role of the ecclesiastical hierarchy within the narrative. By inserting the earthquake in a recurring series of disasters, moreover, the religious community presented themselves as guarantors of social control also in relation to future catastrophic events.

D. Carnevale proposed an interpretation of floods as indicators of the impact on institutions since they are natural disasters that frequently occurred. The scholar questioned the possible existence of a specific “culture of risk” in Naples between the seventeenth and eighteenth century. Carnevale showed that the religious explanation was not the only one accepted for the occurrence of a natural disaster. Local communities and institutions were interested in flood prevention, paying attention, for example, to the lack of infrastructure maintenance. This shows that written documentation and the memory of past disasters had produced important knowledge about recurring risks. However, although the extent of the flood of 1727 had generated such a trauma in the collective memory, this was not associated with a cycle of disasters with which it was necessary to live. Consequently, the institutions did not take radical decisions, considering a similar phenomenon unrepeatable.

Domenico Cecere, in his conclusions, highlighted how the trauma was elaborated in narrative and ritual form and constituted a real monument of memory that represents a symbolic mediation between the past and the present.
Cecere also recalled the significant contribution of literary theory, psychoanalytic theory and neuroscience in the investigation of oblivion. The scholar urged a reflection, also through the tools of these disciplines, that allows us to go beyond a vision “imposed from above”, as emerges from the documents, to understand how these traumas were really experienced by the people.

Finally, he stressed the relationship between space and traumatic events experienced by surviving witnesses. In the countries destroyed by a catastrophe it is impossible to recognize oneself as a community member and to organize one’s collective memory because the inhabitants can no longer symbolically identify themselves with places. This creates in the survivors a feeling of alienation from the place, an inability to recognize a familiar landscape or spatial references, as emerged in the lectio magistralis of Gribaudi. 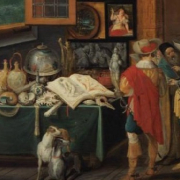 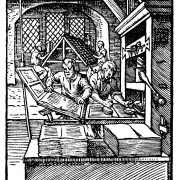 15th-17th September 2022: The "relationes de sucesos" as a space of transformation 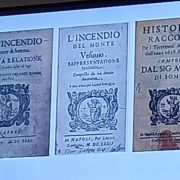 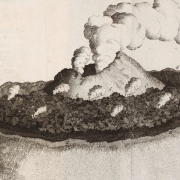 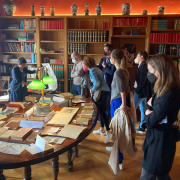 8th December 2022: International Days of the History of the Iberian Monarch...