Blog - Latest News
You are here: Home / October 28, 2020: Calamities and societies of the ancien régime

In the face of the emergency of the pandemic, attempts to research in the past similarities and differences between the ways individuals, companies and institutions respond to this type of event have multiplied. This was the theme of the lecture by Prof. Domenico Cecere From punishments of God to wonders of nature. Calamities and societies of the ancien régime, promoted by Prof. Elisa Novi Chavarria and organized on 28th October by the University of Molise.

Presenting the results of the research of his working group, Professor Cecere explained that the pressure of current events pushes us to look backwards: “From a situation of almost total silence or disinterest in the themes of calamities in history, we have passed, within a few weeks, to an abundance of quotations from Boccaccio, Manzoni, Defoe and Camus in the public discourse, on TV, in newspapers and in social media. Journalists and virologists have improvised as historians to show us how far the containment measures adopted in 2020 resemble those implemented in the ancien régime”.

The experience of the pandemic, just like, for example, the increased awareness of the problems related to global warming and climate change, offers us sufficient reasons to insist on the importance of knowing these problems also in their historical dimension, in order to understand their evolution in the present and to imagine the future.

However, how can scholars of history or of other disciplines in the field of the human and social sciences, contribute to the study of natural disasters, of the past as well as of the present? Why do historians, philologists, art historians and anthropologists work in this area of ​​research that may seem unusual as compared to the more genuine interests of historical research, textual criticism and philology?

During his lecture, Professor Cecere provided some ideas to answer these questions, looking at some texts and images referring to environmental calamities that occurred in the modern age. First of all, the Professor explained the title of the conference which could suggest the idea of ​​a linear evolution of the interpretation of natural disasters, during the Modern Age –  from punishments of God to events inscribed in dynamics of nature. This idea is, however, far from his point of view: “This transition is a projection of historians. In fact, explanations of different types often coexisted in modern society, they were not mutually exclusive”.

This was followed by an interesting overview of how the studies of recent decades have investigated catastrophes as events which, involving multiple aspects of associated life, are for scholars a laboratory to observe, at close range and in the short term, cultural, social and political transformations which disasters with a strong impact have often initiated, accelerated and, in some cases, restrained. The Professor pointed out that catastrophes have the power to question certainties, to undermine hierarchies and power structures, to call into question classifications of human groups and inhabited spaces, as well as to generate or sharpen conflicts between social forces and opposing world views.

Cecere then illustrated  some ideas referred to societies of the ancien régime.which have long been dominant among historians in order to show how stereotyped they are. Finally, he reflected on the sources that may have strengthened these stereotypes, and on how a different reading of those same sources can instead lead us to different interpretations. The Professor also dwelt on how the sources used by historians arise in a situation characterized by certain relations of strength between groups and institutions, and therefore on how important the study of political communication is to interpret them.

The irruption of the extraordinary into everyday life, stimulating the search for news and explanations, expanded the fields and channels of communication, facilitating the elaboration and dissemination of interpretations and multiple points of view. In times of emergency, therefore, the political importance of information increased, and the authorities were often forced to step up their efforts to strengthen control mechanisms. Since it was not possible to rely solely on coercive measures and repression for the maintenance of law and order, disasters were often the occasion of interpretative battles, in which secular and religious authorities and major social powers attempted to impose certain readings of events that had occurred and to stem the circulation of uncontrolled rumours and unfavourable opinions.

During the final debate, Prof. Cecere answered questions from colleagues and students. In particular, Prof. Piero Ventura commented how rituals organized after the calamities by the political and religious authorities had a great symbolic content aimed at re-establishing and confirming the previous hierarchies and the order established before the disaster. Other participants asked the professor about the similarities between the way the current pandemic is being addressed and the policies applied in the ancien régime. In this regard, Cecere emphasized the profusion of news that the virus has generated in the various media. This is the result of the impetuous search for explanations carried out by the common citizen, and of the evident social discontent generated by the crisis that leads people to question the effective management of the pandemic by the political authorities. 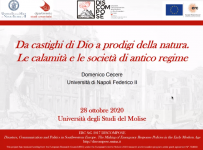 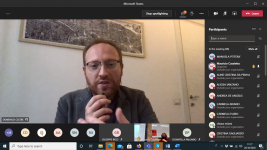