Blog - Latest News
You are here: Home / Lyric poetry about the eruption of Vesuvius in 1631

The recent publication of La Scelta di poesie nell’incendio del Vesuvio – edited by Antonio Perrone and Carolina Borrelli – aims to extend the scope of the DisComPoSe research and the analysis of the catastrophic reports to lyric poetry. In fact, poetry about natural catastrophes was as widespread as printed reports and scientific treatises in several regions of the Spanish Empire. The book, although it is limited to the territories of southern Italy, shows how the religious use of an instrument of communication (i.e. lyric poetry in the Baroque age) can manipulate social memory by creating a different version of a traumatic event. It also evidences the link between poetic production and established power in the 17th century.

The book is an anthology of lyric poetry, dealing with the eruption of Vesuvius which occurred in December 1631. This collection was published in Rome, by Corbelletti, a few months after the event, edited by cardinal Urbano Giorgi, and dedicated to Antonio Barberini, the nephew of Maffeo Barberini, namely pope Urbano VIII (1623-1644). This work collects together 78 lyrics, 24 of which celebrate the  House of Barberini, which gave birth to Antonio and Maffeo, described as the ‘heroes’ of the Vice-Kingdom of Naples needed in this emergency. The remaining 54 texts illustrate the tremendous power of Vesuvius.

All these lyrics find a common ground in the Catholic religion. In fact, the anthology not only included a large number of compositions by cardinals and religious officials (Urbano Giorgi, Vincenzo Martinozzi, Diego Busca,  etc.), but was also promoted by the Church with political intentions. The poems aimed at frightening the Neapolitan citizens affected by the vulcanic explosion, persuading them that this was a punishment from God. In this context, the Curia in Rome was the only institution which could prevent an eruption (or any other disaster) from happening again. 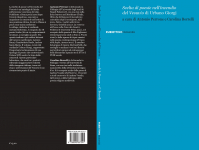 Read a news about the book

Rexpublica and DisComPoSE in discussion
Scroll to top