Memory, trauma, history. War and catastrophe in the twentieth century

The study of the history of the contemporary age requires a specific methodological approach and a particular typology of sources. Prof. Gabriella Gribaudi made this comment during the seminar Memory, trauma, history. War and catastrophe in the twentieth century which was held online on 1st  December 2020.

Gribaudi focused her attention on the birth of social history in Italy which, around the 1970s, developed from the French historiography of Annales, as a dissatisfaction with the traditional and then dominant “evental history” approach. The Professor emphasized the importance of micro-history which, in contrast to “macro” (general and teleological) history, favors the so-called “history from below” and studies its dynamics and social aspects. In relation to the nature and methodology of the investigation, the Professor then highlighted the importance of, on the one hand, official documentation produced in court or drawn up by notaries and, on the other, records kept in the Civil Registration Archives, which are fundamental for the reconstruction of genealogies. Judicial documents and wiretaps are also very interesting because they allow us to reconstruct the complexity of reality. Oral sources and, above all, interviews are also extremely important for the study of contemporary history, for example those reported in the multimedia archive of memories edited by Prof. Gribaudi (http://www.memoriedalterritorio.it/index.php?option=com_content&view=article&id=59&Itemid=63&lang=it).

Oral history has often been criticized because it is considered unreliable due to the bias and subjectivity of the stories. Gribaudi, instead, outlined the main reasons for its importance: it allows us to give prominence to the lower classes, generally excluded from the discussion of great historiographical events; it allows us to reconstruct reality, especially in the absence of written documentation; and finally it allows us to draw directly from the reservoir of witnesses’ memories, both through their stories and through their omissions, silences and errors, which provide relevant information on their interpretation of events.

The Professor cited as an example the interview with a woman, the only member of an entire family who survived the Nazi massacres of 1943 in Bellona (Caserta). This testimony allowed the Professor to show evidence of the war as it was experienced in rural areas and to highlight aspects related to the memory and perception of the war as violence and individual trauma.

Finally, exactly in relation to the importance attributed to individual memory especially starting from the second half of the twentieth century, Gribaudi focused on the creation of memorial monuments created with the aim of preserving the memory of individuals involved in the great genocides of history. This is the case, for example, of Yad Vashem, the national institution for the memory of the Holocaust in Jerusalem, where short biographies of millions of victims are exhibited.

Emblematic also are the small brass “stumbling blocks” located in various European cities. They were designed by the German architect Gunter Demnig to commemorate the victims of Nazism who were deported to death camps. 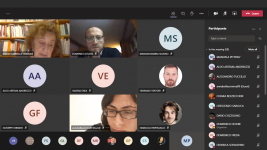 The prototype of the DisComPoSE digital archive
Scroll to top